Chartered Accountant and Cost Accountant by qualification. He started his career in 1986 in the Investment Department of Unit Trust of India (UTI) and spent two decades in UTI and UTI Securities. Headed the Investment Banking Department as President of UTI Securities. Has successfully completed more than 50 Initial Public Offers (IPOs) in his career.

He is also Director on the Board of Association of Investment Bankers of India and earlier served as a Vice Chairman also . His vast experience allows him to leverage his cross functional skills in Investment Banking, Strategy & Networking and is the guiding force for Saffron Capital. 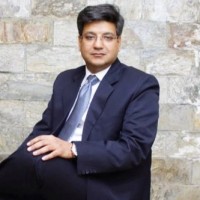 Mr. Kamal Ahuja commenced his Career as an Associate Member of Institute of Company Secretaries of India. He is the founder of Lawmax Advocates and Solicitors, co-establisher of Grover Ahuja and Associates, practicing company secretaries firm located at Delhi, wherein he performed wonderfully as a partner. Later on, He affiliated himself with the Bar Council of Delhi and got enrolled as an advocate. He is tremendously regarded for his versatile corporate and commercial trial skills for dealing complex trade and competitive issues.He has an experience of more than two decades in business advisory and its compliances. He possesses immense management skills and is bestowed with a high degree of knowledge and expertise while handling complex affairs.He is renowned for limitless dedication when it comes to being a part of a team. Education:

Mr. Amit Wagle has an experience of 12 years of in Equity Capital Markets. He has worked with Centrum Capital Ltd and Indbank Merchant Banking Services Ltd (subsidiary of Indian Bank).He is a commerce post graduate, Masters in Management Studies and Law Graduate from University of Mumbai.

Mrs. Akanksha Chaudhary is an Associate Member of the Institute of Company Secretaries of India. She is currently a designated Partner of GA & Associates Company Secretaries, LLP a firm based in New Delhi, wherein she is performing wonderfully as a partner. She has been associated with the organization since 2014 and have handled various matters related to agreement drafting, mergers, listing and delisting of the companies. She is regarded for her prompt replies to the clients and managing the client relationships and carries an experience of over 7 years in handling the core secretarial and listing compliances. She carries high degree of knowledge and expertise as she has worked with the Corporate brand “Clovia” for almost two years.